Home › Discover our Beach! › Come to our Door County beach and discover Cave Point and the Niagara Escarpement 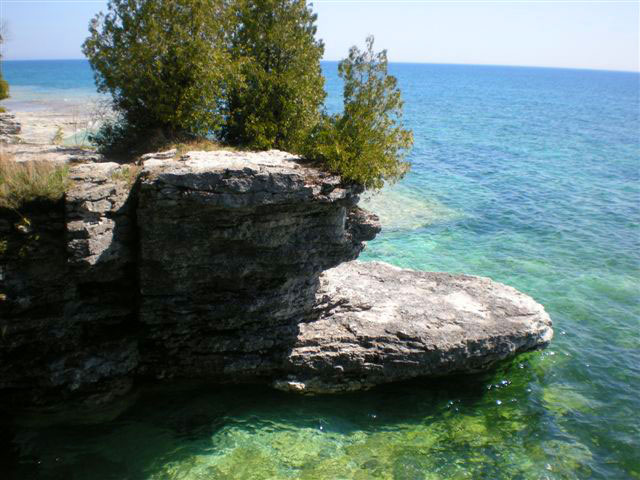 The Niagara Escarpment is the most prominent of several escarpments formed in the bedrock of the Great Lakes basin. From its easternmost point near Watertown, New York,[1] the escarpment shapes in part the individual basins and landforms of Lakes Ontario, Huron and Michigan. In Rochester, New York, there are three waterfalls over the escarpment where the Genesee River flows through the city. The escarpment thence runs westward to the Niagara River forming a deep gorge north of Niagara Falls, which itself cascades over the escarpment. In southern Ontario it spans the Niagara Peninsula, closely following the Lake Ontario shore through the cities of St. Catharines, Hamilton and Dundas, where it takes a sharp turn north in the town of Milton toward Georgian Bay. It then follows the Georgian Bay shore northwestwards to form the spine of the Bruce Peninsula and Manitoulin Island, as well as several smaller islands located in northern Lake Huron where it turns westwards into the Upper Peninsula of northern Michigan, south of Sault Ste. Marie. It then extends southwards into Wisconsin following the Door Peninsula through the Bayshore Blufflands and then more inland from the western coast of Lake Michigan and Milwaukee, ending northwest of Chicago near the Wisconsin-Illinois border.

Plan your Door County Beach Getaway where you can discover the wonder of the Niagara Escarpement and more!
Contact us today to book your beachfront suite at Glidden Lodge.
Phone: 920-746-3900 • 866-454-3336 or email frontdesk@gliddenlodge.com