American Folklore Theatre’s 2014 Season features something old and something new. And all of these somethings will make fans of AFT very happy.

AFT’s 2014 Summer Season, which runs June 11 through August 23, features a trio of fantastic shows playing in repertory. Each year over 35,000 devoted patrons enjoy a cozy night of comedy and musical theater under the stars at the AFT Amphitheatre in glorious Peninsula State Park Amphitheater, Fish Creek, WI. 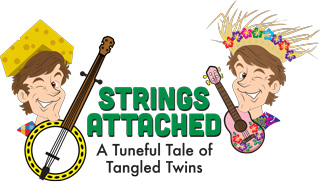 A Tuneful Tale of Tangled Twins

Separated at birth, one twin ends up a ukulele fanatic in Hawaii while the other becomes part of a family banjo dynasty in Wisconsin. The two worlds intertwine in musical merriment and mayhem at a northern Wisconsin lodge.

Packer Fans from Outer Space makes a terrestrial re-visit to AFT after a galactic hiatus of eleven years. This delightfully whacky musical, by Frederick Heide, Lee Becker and James Kaplan, was AFT’s biggest hit ever in 2002, when it made its earthly debut. Since then the show has had multiple productions around Wisconsin, including a run at the Marcus Center for the Performing Arts in Milwaukee in 2012 that received critical raves.

Guys On Ice is undoubtedly our most-requested show ever and hasn’t played on our summer stage for seven years. So we felt it was time for another visit into the world of Marvin, Lloyd, and Ernie the Moocher. Buddies Marvin and Lloyd spend a winter’s day in a shanty out on the ice, talking about life, love and Leinie’s. Guys on Ice returns to the fishing hole for a couple of nights each week.